I’m back in the UK after 10 weeks of travel in Nepal and India. I’ve got to admit, I’m as happy to be back as much as I’m missing the freedom of life on the road.

I think this is a healthy place to be and this, together with someone I met in India, gave me an idea for this post.

Whilst I was sure I’d like Nepal, I wasn’t convinced I’d enjoy my time in India. But, I enjoyed the experience as much as I initially struggled to adjust to the noise / poverty / varying levels of hassle.

Because there is so much more to India than that.

The people are friendly.  The food is great.  It’s historically very interesting.  There is good transport.  From my relatively short time there I think it’s a place you just have ‘to be’, rather than rushing around ticking sights off.

It was in Rishikesh I met this gentleman. He’s called Moksha (which is a term in many Eastern religions for liberation).  I was sitting in a cafe writing my journal when he caught my eye, gave me a quizzical look, and invited me to sit and speak with him. 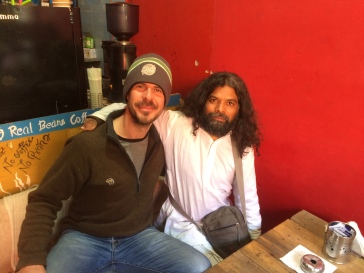 Two hours later I was still there.  He was polite, friendly, well-educated and, above all, happy.  As he explained about his life I couldn’t help but listen with intrigue. Born with both hands and both feet not formed, he’d led a I couldn’t begin to imagine.

He was interested that I was here to travel, practice yoga, and that I’d written a book. I was interested he’s spent years living in isolation, meditating, and how he seemed to be so genuinely at peace and content.

There was lot we talked about, but one thing he said stuck with me. And that was, above all, cultivate an attitude of gratitude.

Now, I’m as guilty as anyone as forgetting to do this, but this is not the first time I’ve been told, or read, this as a part of someone’s attitude. Not something as arbituray as ‘I’m healthy’, or ‘I have money in the bank’, or ‘I’ve got a job’. But the subtler things in life.

Like a past relationship that helped you out in a certain time; the fresh cup of coffee you’ve made and are about to enjoy; the way the sun sets over the garden in the evening; take your pick…

Maybe the five minutes it takes to do that could help shape the way you live the rest of the day.

PS. I’m writing this after attempting to drive to work this morning after having de-iced one car only to find it had a flat tyre, and then having to de-ice another car, to then get stuck in traffic.