Last post on South Africa, I’m pleased to catch up at least / last!

Back to March for the final time, into the Kruger national park, then a quick drive to Jo’burg and then the 26 hour train ride back to Cape Town.

Kruger park is one of the largest game reserves in South Africa, areas first becoming protected by the South Africa Republic in 1898, before it became the first official national park in SA, opening in 1926.

At least 5 different people I spoke to, when talking about to the park, mentioned that it was the same size of Israel…. Seemed like a random comparison to me, but I did google it 🙂

What I liked about the park was the ability to drive in one entrance, take a slow meander across the different roads that the cut through the parks changing landscape, and just pop out another exit.

Very easy to drive yourself, very easy to spot animals (best at sun rise and sunset – although I did do a 5.30 am start on one day and saw nothing until 11 am….), and, if you didn’t mind taking the dirt roads rather than the sealed tarmac, you can escape at least some of the crowds, as long as it doesn’t rain, and the roads don’t flood….

What I did notice, and this is just an observation, was the number of retired tourists in new 4 x 4’s pretending to be game rangers crowding the animals and blocking the roads (compared to me in my late 30’s, in my hire car, pretending to be a game ranger, crowding the animals, blocking the roads….), but seriously, at times, rather than a natural environment it felt a lot like a giant zoo!

I guess this is the outcome of making something so incredible, so accessible, and so easy to experience.

That saying, it was a very worthwhile trip, and to see a family of elephants for the first time, stumbling through the grass just meters in front of me, or spotting a hyena, completely unfazed by my presence taking a drink of water from a pool just next to where I waited, were just a few of the things I will not forget.

Leaving the park I had to get back to Jo’burg to drop my car off, so decided to stay a least one night to experience the city life before picking up the Shoshaloza meyl train back to Cape Town.

I didn’t see much of the city itself, sleeping in one of the suburban but lively areas, but was surprised how tree lined, green, and just like any other western city it looked (not sure what I was expecting).

The streets were busy and even though I didn’t feel threatened by day, the guest house owner was adamant that I should not wander the streets after 12 am alone.

I’m sure it can be a fun place with a lot of vibrancy, so perhaps another time I will stay longer.

Dropping the car off and entering the main train station was easy, as was figuring out the pre-booked ticket collection for the long journey back to Cape Town. I had read that the area around the station was not the safest place to spend time, but it all felt OK to me, and despite some hassle from a few characters hanging around the main concourse, I didn’t have any real trouble.

The Shoshaloza meyl (meaning pleasant journey), was something I had read about from the Man in seat 61 and as I’d driven from west to east, seemed like a natural way to get back to where I had started in Cape Town, with a chance to catch up with a few friends I had made.

It’s pot luck who you share with, and sleeping 4, it could be crowded. I got lucky and spent my journey with a 70 year old man from the Transkei, who, even though he could hardly speak any English, was fun to be with, and very bemused by my lack of luggage, continually asking if I was some kind of mountaineer to be able to pack so well and travel so light?

The train felt safe, and armed guards were present in all the carriages, hopefully as a deterrent rather than a necessity! Even though it was a long arduous run at times, stop-starting at ever station on route, it was an experience.

It’s worth paying for the attendant to make up your bed at night. It only cost a few pounds, but I didn’t, mainly because the man I shared my cabin with assured me it would be too warm and it was a waste of money. ‘Fair enough’ I thought, but I realised my mistake when he pulled out his jumper and coat to wrap himself up in, and I had nothing. It was cold. Very very cold.

The train arrives into Cape Town about 26 hours later, and whilst you are ready to get off after that amount of time, is it definitely a viable and easy option to use instead of flying or driving.

Being back in Cape Town marked the end of another great trip, and my short time there was spent with friends old and new, doing lots of yoga, and volunteering at the animal rescue centre Fallen Angels, showing some other volunteers how to dig holes, build shelters, and eat biscuits 🙂

Fallen Angels was quite an emotional place to see, hundreds of abused, neglected, unwanted dogs and cats living in shelter conditions, and whilst I was only there for a few days, I hope I made a little difference. I have a lot of respect for anyone who puts their time into supporting things like this. 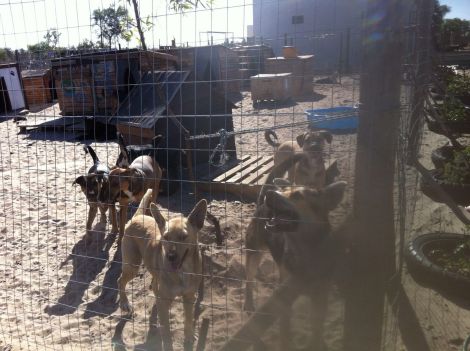 As I sit here typing this out, I can think of lots more to say about this amazing country, its people, its diversity of nature, its cities, and its ease of travel, but for now, that’s it for South Africa.

If you have not been here yet, and get chance to go, I strongly recommend it, especially travelling further than Cape Town (which in itself it a great place).

Thank you for the amazing experiences, inspiration, and memories.

I will be back, it’s just a matter of when….

1 thought on “Kruger national park, quickly into jo’burg, and ‘a pleasant journey’ back to Cape Town”